There are 5 cards tagged Brusher Mills

Harry 'Brusher' Mills (1840 – 1905) was a hermit living in the New Forest who made his living as a snake catcher. He lived for most of his life near Brockenhurst and Lyndhurst catching snakes to make medicines and remedies and as food for the animals of London Zoo. He became somewhat of a local celebrity, attracting tourists who wanted to have a picture taken with him.

His nickname came from his habit of brushing the pitch at the local cricket ground between innings to earn a few coppers.

Born in Bramshaw and later living in Bartley and working as a groom, from about 1886 he lived about a mile north of Brockenhurst in a woodland shack in the area occupied now by Hollands Wood Campsite. After nearly completing work on a larger hut, it was burned down - probably to avoid him acquiring 'squatters rights' on the land. He then lived at nearby New Park until his death.

Brusher was found dead in an outhouse at the Railway Inn in Brockenhurst (now named 'The Snakecatcher' in his honour), the coronor concluded he had died of heart failure. He is buried in St Nicholas churchyard, Brockenhurst, where his tombstone can still be found.

Stuart issued several cards of Brusher, including perhaps the most well-known image of him and of his tomb.

Further biography can be found on Wikipedia. 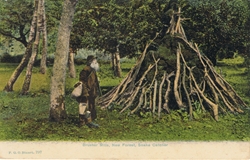